The resolution stated the ONMA’s intent to continue key activities of the OCMA, particularly its successful annual fall conference. A new ONMA committee, the ONMA Circulation Managers Committee, includes members of the most recent OCMA board.

To learn more about the activities of the ONMA Circulation Managers Committee contact:

To provide information for the Circulation pages or to submit circulation-related items for the Bulletin newsletter, contact:

ONMA Circulation Associate Members
Thank you for your support of ONMA!

The Ohio Circulation Managers Association was founded in 1917. With a suggestion from Edward Gans, associated with Editor and Publisher in New York, J. T. Kavanaugh of the Dayton News called a meeting for October 30, 1917, in Columbus, Ohio, to discuss the problems of newspaper circulation.

At that meeting, the Ohio Circulation Managers Association was organized with J. T. Kavanaugh being elected as president. Clem O’Rourke of the Dayton Journal-Herald was appointed to be responsible for entertainment. The first membership meeting was held April 2, 1918, at the Miami Hotel in Dayton, Ohio. Thirty newspapers were represented at the meeting.

Over the years, OCMA strengthened its membership to the point where most Ohio newspapers had at least one circulation executive as a member of the association. Many newspapers had multiple members participating. In addition to the regular membership, many newspaper-related suppliers joined as Associate Members.

The first woman to be elected to the Board of Directors was Leslie Counts, Lorain Journal. Leslie was later elected as the first woman president of OCMA in 1988. In 1978, to add continuity to the Board of Directors, the by-laws were amended to include two past presidents on the board for two-year staggered terms. In 1982, OCMA was incorporated as a Tennessee Corporation. King, Bellow and Little (Mike Zinser) served as counsel. More recently in OCMA’s history, Zinser and Patterson served as legal counsel.

The Glenn L. Cox Carrier Achievement Awards program was established in 1952 to honor youth newspaper carriers throughout Ohio. Over the years a number of changes have been made to enhance the program. The program now recognizes carriers in three different age-related categories, which are Youth, Adult and Senior. An award program is held annually with the award presented at the fall circulation conference. The award was named for the founder of the program, Glenn L. Cox, former circulation director of the Dayton Daily News.

In 1982, the Board of Directors established the OCMA Presidential Award. OCMA members in good standing who have made a considerable contribution to the success and betterment of the association or who have made an outstanding contribution to the circulation profession may be nominated for the award. The selection committee is chaired by the immediate past president. The award is presented once in a calendar year, not necessarily annually. To date, nineteen individuals have received the award.

OCMA, in recent years, had established a variety of training programs for its members. Most popular programs were in the area of district manager training, customer service training and legal training conducted by Mike Zinser. The association was recognized to be a leader in the training area as well as one of the stronger circulation associations in the country in general.

In addition, most of the OCMA’s other activities are now part of the programming of the Ohio News Media Foundation, a 501(c)3, non-profit organization.

*Indicates the individual is deceased

The second annual Mega Summit East was held Sept. 22 to 24 in Pittsburgh.

Thank you to everyone who attended this year's circulation conference. Access the links below to download presentations, photos, programs and more information from the conference.

The 2015 Ohio Circulation Conference was a success! Thank you to everyone who attended, especially our speakers and vendors.

You can also see presentations made at the conference by clicking on the links below:

A special thank you to the lunch sponsors.  We appreciate your support of the circulation managers! Mike Zinser discussing the many aspects of managing
independent contractors at the April 28 district managers
training.

The Carrier of the Year Achievement Awards Program was established in 1952 to honor youth newspaper carriers throughout Ohio. Over the years, a number of changes have been made to enhance the program that is now known as the Ohio Newspaper Carrier of the Year Award. The program and annual awards banquet were originally named for the founder, Glenn L. Cox, former Circulation Manager of the Dayton Daily News.

The selection process is based on a point system, which includes:

The 2019 Carrier of the Year Awards were presented at the ONMA Convention, which was held February 6-7, 2020, at the Renaissance Columbus Westerville-Polaris Hotel. 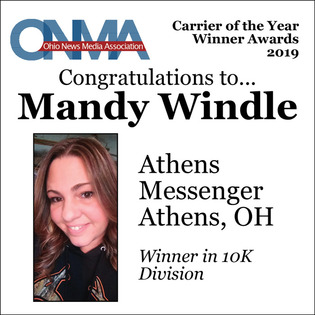 Mandy Windle, The Athens Messenger
(Under 10K Circulation)
Mandy Windle is a 38 year old housewife and mother of two. She currently delivers two motor routes serving 305 customers and a store bundle route for the Athens Messenger. When Mandy is not delivering papers for the Messenger she enjoys spending time with her children who are very active in sports and 4-H. 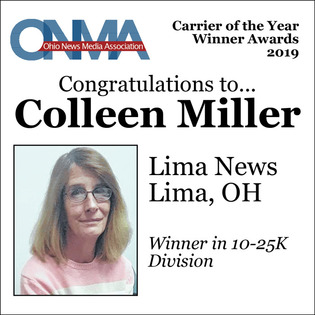 Colleen Miller, The Lima News
(10-25K Circulation)
Colleen Miller delivers The Lima News to around 250 customers and her customers praise her for not only placing their newspaper where it is easy for them to reach, but also being a friendly face that looks out for them. “Colleen just doesn’t deliver the paper, she makes a connection,” says Tina Bowers, who has been subscribing to The Lima News for 68 years. Colleen simply says, “I just treat people the way I would want them to treat me.” 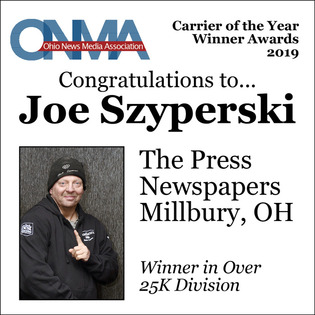 Joe Szyperski, The Press Newspapers
(Over 25K Circulation)
Joe Szyperski has delivered The Press Newspaper in six different decades for an astounding total of 43 years. He started when he was a young boy and has stuck with it ever since. He has always taken great pride in never missing a week and getting his 340 papers delivered the right way, regardless of the weather, or his own personal adversities. He’s continued to accomplish this high level of delivery over the last seven years despite being on daily chemo treatments after he was diagnosed with metastatic melanoma. It’s so rare to find someone that delivers through such adversity and someone who takes such pride in completing the job. In his free time Joe enjoys tending to his garden and volunteering at St. Jerome Church. He has worked in the landscaping industry most of his life and as a wrestling coach in the Toledo area for the last 39 years.

2019 Carrier of the Year Runner-ups

Justin Brown, The Times-Gazette
(Under 10K Circulation)
Justin Brown has been a motor route carrier for nearly 10 years. Currently, Justin delivers approx 220 papers to home subscribers and he also drops papers to several nursing homes in the Ashland area.

Kage Moss, The Marysville Journal Tribune
(10-25K Circulation)
Kage Moss has been a newspaper carrier for 5 1/2 years and has 92 customers. Kage is in the 8th grade at Bunsold Middle School and serves on the student counsel.

Zuhirah Uqdah, The Dayton Daily News
(Over 25K Circulation)
Zuhirah Uqdah has been a carrier for over twelve years with three routes in the Kettering, Centerville and Washington township areas. She delivers over 10,000 newspapers a month. She is the mother of seven adult children, fourteen grandchildren and four great grandchildren.

The 2018 Carrier of the Year Awards were presented at the ONMA Convention, which was held February 7-8, 2019, at the Renaissance Columbus Westerville-Polaris Hotel. In her application, Willona was asked to describe ways she helps her subscribers and she replied: "Some of my customers like to talk to me and give me hugs, so engage in conversation and give them hugs too." 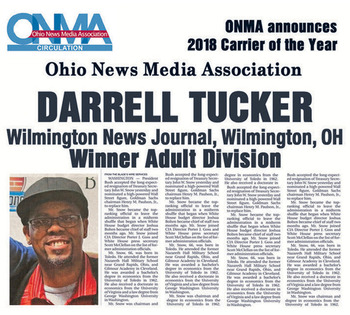 Darrell's manager Dawn Gunkle says Darrell arrives for his route every single day at 3 am without ever making a single complaint. ONMA received over 40 letters from Darrell's subscribers recommending Darrell for this year's Carrier of the Year and in those letters provided fantastic testimonials of how Darrell goes above and beyond every single day. 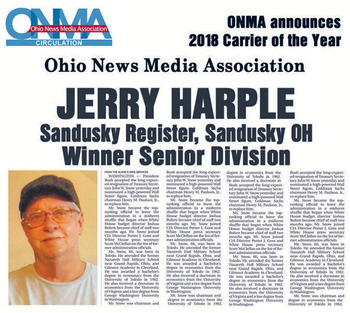 When asked why do you like being a carrier, Jerry replied he enjoys being a carrier because he has made so many new friendships over the years and feels the work is not stressful at all. Jerry and his wife do wellness checks on customers if consecutive papers begin to pile up for some of the elderly customers. Jerry takes pride in top notch customer service to the subscribers he serves.

The 2017 Carrier of the Year Awards were presented at the 2018 ONMA Convention, which was held February 7 & 8 at the Columbus Hilton/Polaris.

In the short time that Riley Bordgerding has been delivering the Journal-Tribune, she has made a large impression with her customers. Each and every day Riley delivers she goes above and beyond to make sure her 93 customers are well taken care of.

‘Reece’-ently, Riley stuffed the Thanksgiving edition with a 2 pack of Reece’s cups to show her appreciation for her customers. Not only did the subscribers appreciate the extra mile that Riley went, so did the Journal-Tribune with a front page story.

Cheryl Welty, Riley’s manager, says “Riley takes the extra effort to correspond with each customer” and “all of her efforts have been rewarded by the customers with a large amounts of tips”.

Our adult Carrier of the Year winner, Julie Held, has found that “a clean and dry newspaper delivered at a predictable time and place, is the key to keeping the subscribers happy.” With an attitude like Julie’s it goes to show that the doing little things and going the extra mile can make a lasting impact. As her DM, Bob Borer, has the honor and privilege to work with her during her 19 years delivering The Blade.

As a carrier, Julie finds it “ridiculous” to be able to get paid and do what she loves, driving the NW Ohio roads at night and listing to talk radio. Julie’s 230+ subscribers appreciate what she loves to do and the service that she provides them. 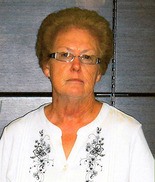 One word can be used to describe the Senior Carrier of the Year award winner Freda Edwards, DEDICATED. For the past 40 years, Freda has been delivering newspapers for the News-Journal. In Wilmington. During her carrier, Freda has never missed a delivery day which includes working through illness’ and the dark days when her husband passed away. Freda explains her willingness to work, “you have a job to do and no one is going to do it for you, so you keep on going”. This mentality makes her a favorite amongst her fellow carriers and the staff of the News-Journal.

When Freda is not delivering to her 180+ subscribers, she spends her time baking cookies and other baked goods for her friends and the patients at the local nursing home she visits frequently. Freda’s manager, Dawn Gunkel says, “Freda is one of the kindest people that I know, and I believe if we had more people like her, the world would be a much better place”.

Past Carrier of the Year Award Winners

The President’s Award was established to recognize a member, past or present, active or retired, for outstanding contributions to the circulation profession. The award is not presented annually, only when there is a deserving recipient.

*Past President of the former Ohio Circulation Managers Association