‘Tis the season for barbecues, fireworks and lots and lots of parades.

Photographers around the state are gearing up and sharing some secrets to getting that touching or funny parade photo. 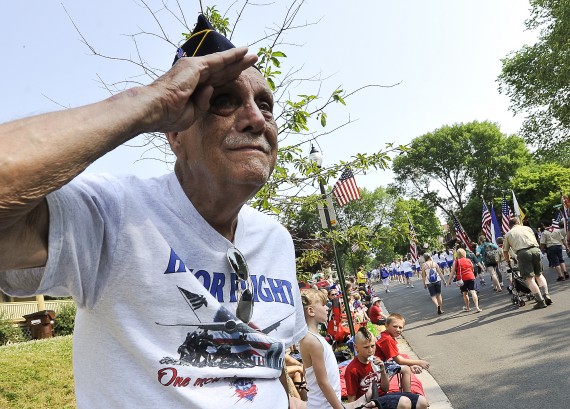 WWII veteran George Snook stands and salutes as every flag passes by along the parade route during the 2012 Clark County Memorial Day Parade in Springfield. (Bill Lackey/Springfield News-Sun)

Bill Lackey, staff photographer for the Springfield News-Sun, snapped this shot at this year’s Springfield Memorial Day Parade. The parade is known for being one of the largest in the country lasting up to three hours.

“I try to look for faces in the crowd that sort of sum up the actual event,” said Lackey. “Sometimes it’s a little kid all dressed in red, white and blue with flags. In this case it was this veteran who stood and saluted every time an American flag passed by. I saw him doing this, so I stopped to talk to him, wishing he would salute again as I was standing with him, and sure enough as a float passed he saluted and I got the photo.”

Lackey has found that often times the crowd makes for a better shot than the content of the parade itself.

“I usually try to focus on the crowds along the parade route rather than the actual parade,” he said. “I’ve found that most parades look the same. I also try to incorporate the crowd in the parade shots too. To me the people and the atmosphere are what make a parade.”

Another important component to the best parade shot possible is preparation, for which Lackey has some advice.

“To start with I usually use two cameras, one with a wide angle lens and one with a telephoto so I don’t have to switch my lenses back and forth,” said Lackey. “I never sit at one spot and I move along the parade route, usually moving a little slower than the parade, which means wear your walking shoes.” 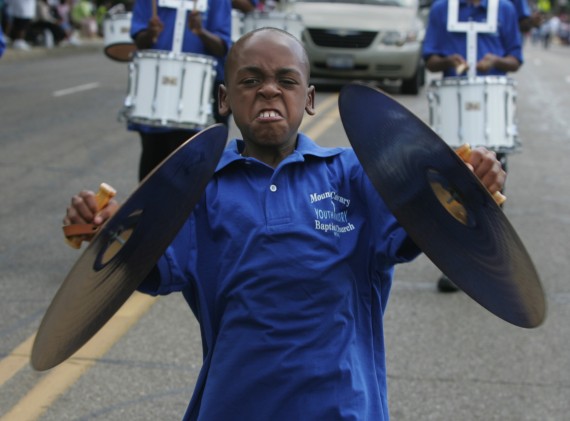 According to Akron Beacon Journal’s director of photography and graphics Kimberly Barth, Masturzo watched the Baptist Church band and noticed how small the young boy was playing the symbols. That grabbed his attention so he followed the band marching on the parade route and captured a great moment.

Barth said being attentive is key to getting the best shot possible.

”When covering any assignment, especially a parade you need to be observant,” she said.  “Look at the parade route, look at those participating in the parade and look at the crowd. Search for interesting people or angles. There is potential for making numerous great pictures. Be observant, be patient. Identify what you want to capture and work it to capture the moment.”