How to Photograph a Front-Page Worthy Storm Photo: A Journalist’s Guide

Keep track of the weather: Knowing both that a storm is coming and when it is coming is important in getting a quality storm photo, says Sam Greene, staff photojournalist at The Morning Journal in Lorain. “We're right on Lake Erie so some of the stuff we get will come out right over the lake, so sometimes it’s good to keep an eye just on the radar and try to get an idea of when the storm's going to hit town,” Greene says.

Shoot the storm from afar: But you don’t have to wait for a storm to hit to start taking photos. Photographer Mike Schenk, a more than three-decade veteran of Wooster’s The Daily Record, says while photographing a huge storm may mean you’re in the middle of it, with smaller storms, you can try to follow or be ahead.

And Greene says storms over Lake Erie aren’t always necessarily heading toward Lorain but toward Cleveland about 35 miles away. This is one of his favorite aspects of photographing storms. "Sometimes I like to head out to the beaches in town and grab some photos that show the big storms coming out over the lake as they kind of ominously head in towards the city,” Greene says. 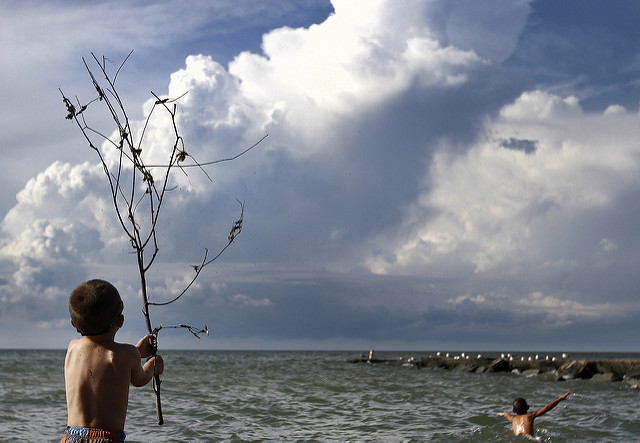 Show location and contrast: Mike Semple, a photographer at The Tribune Chronicle in Warren, says when a storm is on the horizon, some photographers like to shoot Warren’s downtown courthouse in the foreground with black clouds and rain in the background. This helps establish where the photo is at, Semple says.

Shooting a photo like that can also help establish contrast between the storm and the setting, Greene says. He says he has visualized this type of shot but has never had a chance to take one.

Find a human element: For a newspaper storm photo, Paul Tople, who has been at the Akron Beacon Journal for over 40 years, says human activity is what to look for. This was Tople’s priority when he photographed a July 10 storm. "The first thing I did was look for people running in the rain, and I found some people in downtown Akron that were trying to get out of it,” he says. 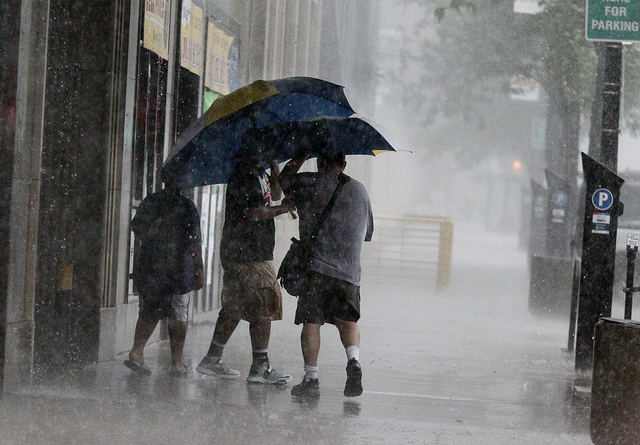 Semple in Warren shot a storm that same day and had a similar train of thought. “All I was hoping for was to find somebody outside, you know, relating to the storm,” Semple says. “And I did. I came around a corner, and there’s some guy walking in his front yard up to his ankles at least with the water rushing down the street. And I’m just thinking, ‘What’s this guy doing?’ This guy had to see what was going on, and I got a picture of him out there.” 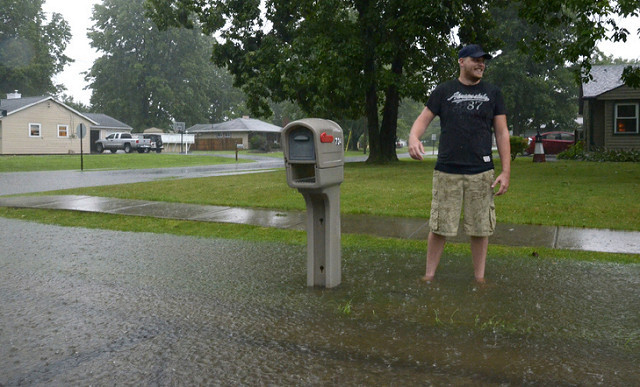 Leaving your camera on automatic can give you undesired blur, Tople says. As the amount of light outside drops, the shutter speed might drop, causing the blur.

Wide angle lens or telephoto lens: Or both, says Greene in Lorain. When photographing a storm, he sticks with his standard 16-35mm wide-angle lens as well as his 70-200mm telephoto lens.

But Tople says most of the time the Akron Beacon Journal’s photographers use telephoto lenses. “You can shoot things that happen without being right on top of them,” Tople says of the lenses. For example, when shooting the July 10 storm, Tople used his telephoto lens to capture a couple cars stranded by flooding. 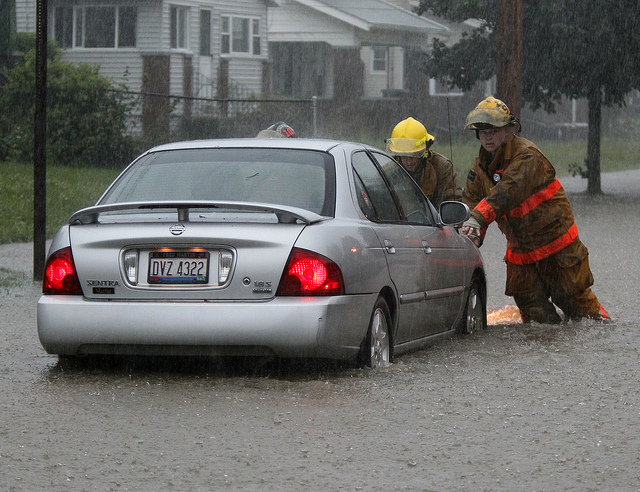 Lighting and exposure: Photographing during a dark storm can be a challenge, The Tribune Chronicle’s Semple says. While he says sometimes you don’t have any choice but to use the flash, he doesn’t like to, as you lose the texture of a photo of pouring down rain or people getting pulled in on a raft from flooding. Semple took the following photo without flash using a telephoto lens, as he said he was on the edge of the flooding, and the people were far away. 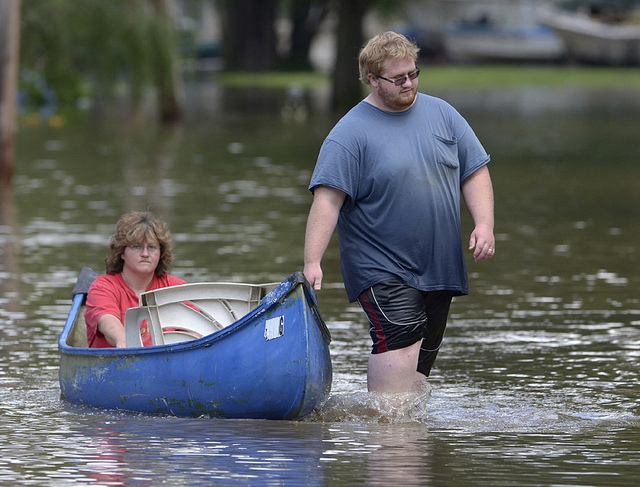 Because lighting can drop during a storm, Tople says sometimes he’ll increase his camera’s sensitivity to light to ISO 1000 and even sometimes ISO 1600. Also, his camera has a turn-wheel that allows him to increase or decrease exposure. During normal daylight, Tople will shoot with decreased exposure. “During a storm, I’ll take that back to the neutral position or even over expose it one stop just to show details in the storm activity,” he says.

Dealing with the Rain

Be proactive about keeping your camera dry: A challenge with photographing a thunderstorm? “Just trying to keep this equipment high and dry,” Semple says. To help with this, he uses a cover that goes over the lens and body of the camera, which at least helps a little. “It still is a challenge to keep it dry no matter what, with the wind blowing and everything else,” he says.

Tople also uses a cover, specifically a JCC RI-5 Rain Cover. It’s a drawstring plastic bag that slips over the lens, covering part of the body of the camera.

Tople also brings towels with him in his car. “I always throw extra towels in my raincoat, and it helps you wipe things down constantly while you’re trying to shoot,” he says.

Shoot from your car, if possible: Another way to keep your camera – and yourself – dry is to simply shoot from inside your car, both Schenk and Semple say. “Sometimes you have to stay in the car and just roll down the window,” Semple says. “You can compose the photo from there without getting soaking wet." That is exactly how Semple took the following photo. 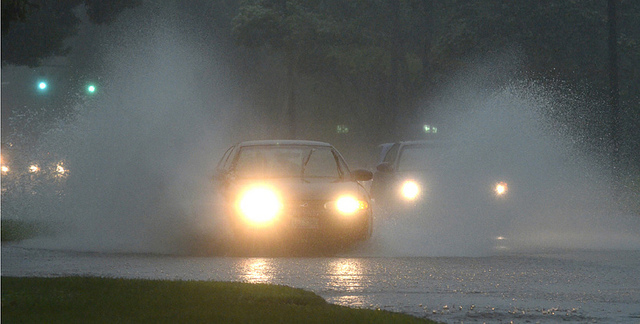 Jeff Van Natta, chief photographer at the Norwalk Reflector, also has shot storm photos from his car. "If I can work it so I don't have to get out of the car, I like that," Van Natta says.

Rely on your experience and a dry lens: Recently when it was pouring down rain, Semple’s camera didn't know where to focus automatically. He says he deals with these issues with his years of experience. He takes his time shooting and may take the camera off auto-focus if necessary.

And if all else fails in keeping yourself and your camera dry, at least keep that front lens dry, which The Morning Journal’s Greene says is the main challenge.

Monitor the police scanner and social media to find out what’s going on: A hint to locating places in your community that might be damaged from a storm is to monitor the police scanner. “You can sometimes hear when firefighters are maybe going out to respond to a power line down or maybe a tree down on somebody’s roof,” Greene says. In addition, Schenk says The Daily Record has a friendly relationship with local law enforcement, and they can help Schenk and others find out about damage, such as a tree on a house.

Greene, who graduated from the University of Cincinnati in March 2012, also monitors Twitter and Instagram to see what people are talking about, including any storm damage. He searches hashtags such as #Lorain and #AvonLake.

Know the area so you can find flooding and other damage: Schenk says simply knowing the area can be helpful in covering storm damage – for example, you might know where you can go to get a flood shot, such as the photo below. 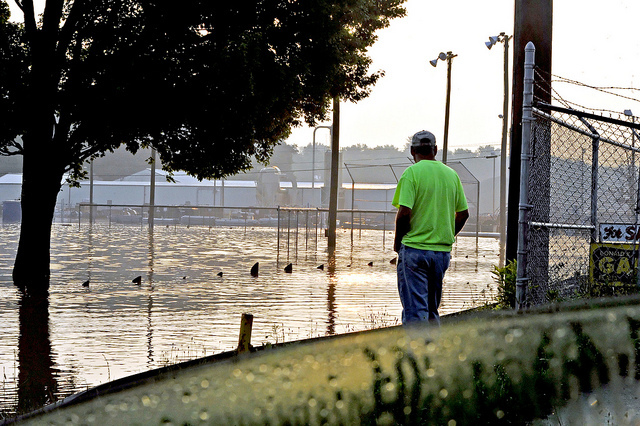 After Tople in Akron found people reacting to the July 10 thunderstorm, he then went to low areas where he thought there might be flooding. “The thing with a thunderstorm is they don’t last very long,” Tople says. “If you’re going to get really good pictures, you need to be there at the beginning or shortly after because it doesn’t take long after the storm blows through that the drains take care of a lot of the water, and you don’t get the impact that you get during the peak of it.” 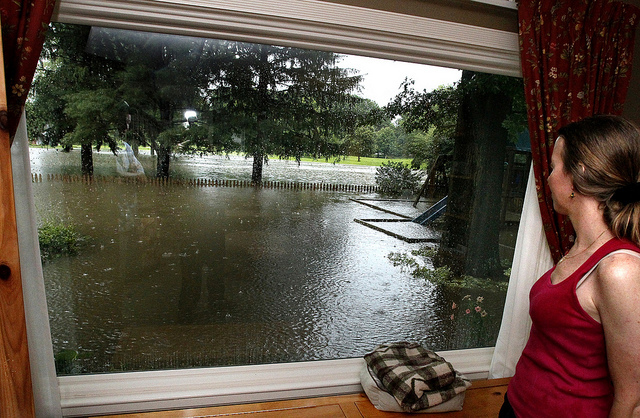 Get out of your car and walk around: When Semple in Warren is covering storm damage, he drives to where he’s heard there’s been damage – and then gets out of his car. “Usually the easiest way is to park and get out and walk around,” he says. Semple did that when covering the 1985 Newton Falls tornado.

The photo below is of Newton High School’s gym. 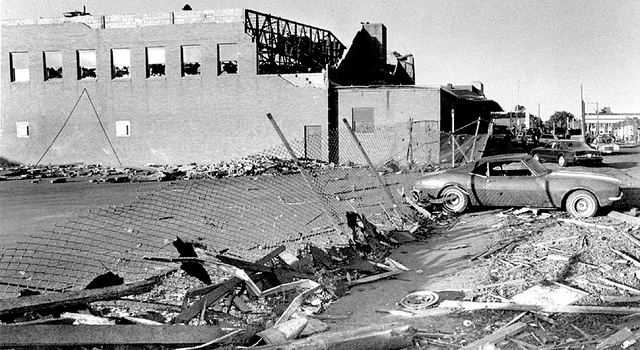 Greene also says to try to put a dollar figure to the power of a storm and show what it’s going to cost people. “Storm damage by the dollar kind of illustrates that,” he says. Photos that can accomplish this include those of a damaged business or home.