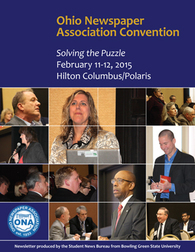 In case you missed a session at the 2015 Ohio Newspaper Association Convention, or missed the convention entirely, extensive coverage of the event is available. News, photo and video coverage were produced by the Student News Bureau from Bowling Green State University and can be found below.

Convention Edition of the Bulletin (PDF)